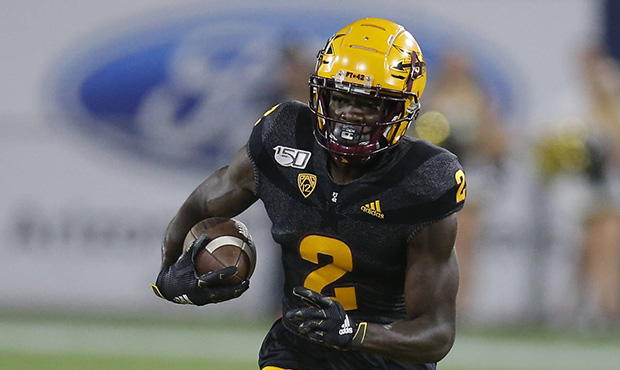 Position:
School:
Height:
Weight:
WR
Arizona St
6'1"
205 lbs
Dynasty Mark
Aiyuk surprised some people as the 6th WR off the board (25th overall). An under the radar prospect who has a strong all around game and very explosive after the catch.

Aiyuk is near the top of this class for me when it comes to creating after the catch.

He's so twitchy with his movements and doesn't lose much pace when changing direction. I believe he's faster than his 4.5 40 time suggests (was dealing w/ a core muscle injury).

Between this pick and the last year's Deebo pick, it's clear the 49ers value receivers who excel after the catch.

Even though they do it in different ways, Deebo more physical and Aiyuk more elusive, they produce similar results.

Below shows some of his twitchiness and ability to change direction without losing momentum.

Bad vision at the end and coughs up the ball (though he may have been down), it's still a good display of his elusiveness with the ball.

What I love about the play below is the feel he has as soon as the ball is delivered. He contorts his body to bend his path and create a cushion with the corner before getting back towards the pylon to beat the safety to the end zone.

Starts at the top of the screen and gets the ball on the misdirection before an impressive hurdle over a defender.

Not a huge play in terms of yardage, but it shows off some of the athleticism that Aiyuk is not afraid to use with the ball in his hands.

I wish I had the all-22 to see his full route on this one, but it's a great example of the feel he has for the defense around him.

He catches the ball with his back to the defender, but he knows exactly where that DB is to find space and pick up 10 more yds.

Aiyuk has some of the best footwork on vertical routes in this class.

His footwork is so subtle and effective, and he's got an uncanny ability to fake out defensive backs when going vertical.

He's showing like he's going to break inside and sells the DB on that before breaking down and blowing by on the outside.

If the QB had a better arm that's an easy touchdown. Instead Aiyuk has to wait under the ball after completely losing the DB.

Another one that should probably be an easy touchdown if he had a QB with a better arm.

This little hesitation move is so fluid... it gives him just enough space to get by the DB. Great tracking to the ball and comes down through contact.

This time he's selling the outside route hard. He sets the DB up way outside before some nifty footwork to get inside position. He's masterful at building pressure and punishing defenders for over committing.

Aiyuk has great feet and good bend in his routes.

This clip below is a thing of beauty as he tears the defender up with a really crisp route. Really fast footwork to get separation and a first down.

Another one I desperately wish I had the all-22 for.

This one he's dealing with press look, which he's had some struggles with. Nice elusive release to avoid the press, and then a sharp hesitation at the top of the route to create a lot of space underneath the DB.

The best way to stop Aiyuk seems to be getting physical and getting hands on him. The problem is, he's not easy to get your hands on.

Great toughness here to get through tons of contact at the top of the route and while still selling the safety on an outside route.

Aiyuk has CRAZY long arms (81"), and it's tough not to notice once you know how long they are.

It was also tough to notice because Aiyuk rarely every got a ball in stride, so plays like this one where he has to stretch for the ball are pretty common.

Another poorly thrown ball forces him to adjust, this time the throw is well behind him.

Impressive body control to stop on a dime and extend out in the opposite direction of his momentum to make the grab.

Aiyuk at the bottom of the screen. He is met with a press that basically stopped him in his tracks.

He adjusts well and finds a gap in the zone, but at the NFL level he'll need to prove he can consistently beat/deal with corners who press at the LOS.

Another place that Aiyuk needs to prove he can win consistently is against physicality at the top of his routes.

This may be a hold, but you're going to get a lot of contact in the NFL and being able to separate through that will be crucial for Aiyuk.

Overall, I love the fit for Aiyuk and the 49ers. I think he's going to be able to step into the deep threat role Goodwin was meant to fill, but his YAC ability lends itself extremely well to how Shanahan likes to get his guys out in space.