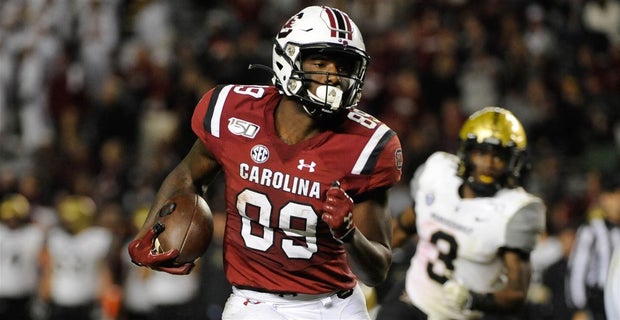 Position:
School:
Height:
Weight:
WR
S. Carolina
6'3"
216 lbs
Dynasty Mark
Edwards is one of my favorite receiver prospects in this class. He's a fluid route runner and a monster with the ball in his hands. He entered the draft with a breakout age of 17.9 and a whopping 48.4% dominator rating.

This first play vs Alabama is when I fell in love with Bryan Edwards as a prospect.

He's got that dog in him as my guy @DynastyPhilDawg likes to say. His physicality and ability with the ball in his hands makes him stand out in this class for me.

Edwards' threat after the catch comes from a blend of elusiveness and power.

The clip below shows off good burst and ability to see the field really well, navigating to the end zone almost untouched as he accelerates through the D.

He's got really nice contact balance and power for a WR.

Below is a perfect example of his physicality. The contact is a little awkward... but he doesn't lose balance and keeps churning for a first down.

Below is another carry vs Bama. This time he completely sheds the arm tackle from the defensive lineman before finishing the run by falling forward through contact.

One of my favorite things about Edwards' game is that he's always ready for contact, and exceptionally physical. Bryan Edwards is rarely vulnerable after he catches the ball, and often is the one delivering a blow after the catch.

Another similar type of play below. The defender thinks he's in line for an easy blow up shot, but Edwards is ready for the contact and his strong base bounces the defender off of him and he easily gets the edge to the end zone.

Every once in a while Edwards hits you with an unbelievable catch in traffic. Although his ability to extend his catch radius isn't super consistent.

Below is one of those spectacular plays where you think the sky is the limit.

Really nice route here vs Patrick Surtain, who's a big corner who likes to get in your space. Great use of hands to create a bit of space and then completely loses him at the top of the route. He's really good creating space at the top of comeback routes like this.

Top of the screen here. Ball doesn't come his way, but he slips past the press coverage and gets a step on the defender. He relies heavily on his hands to beat the press and does a good job of it here.

Edwards gets behind Diggs and the Bama secondary on this play. He didn't run at the combine, so seeing him with some functional speed on tape vs an NFL-caliber prospect is a good sign.

I love the measured pace before turning on the jets and getting behind the D.

Nice job selling the out before turning upfield. Once the DB bites he blows by his guy for the touchdown. He isn't a burner, but he's always in control and knows when to turn it on and get upfield to create some space.

One big knock that stands out consistently is using his body to catch the ball, especially on short slants and balls like this. Below is a perfect example of being way too late to get his hands up to the catch.

Edwards is going to be a guy I target heavily in rookie drafts (draft spot/capital pending). Since he missed the combine with a foot injury, he may fly under the radar a little bit... but this guy can play.