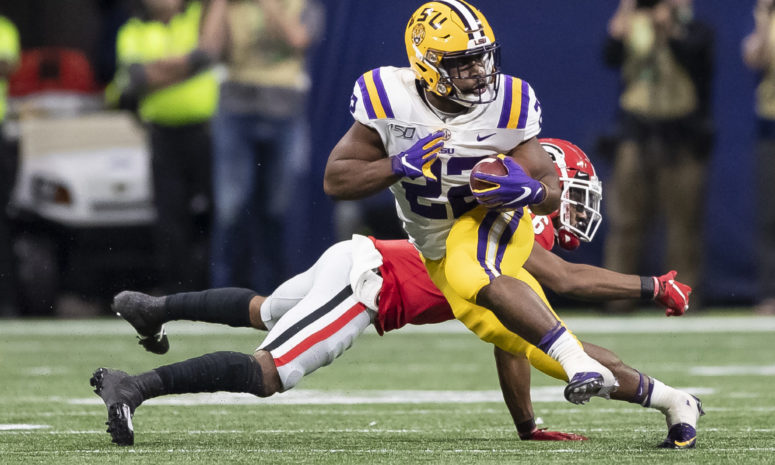 CEH is SMOOTH… he has elite elusiveness/footwork, excellent vision, great burst, and is a proven receiver.

CEH has shown great instinct and patience running the football, showing he's more than a receiver.

In the clip below he does a great job pressing inside, then sees the D overcommit so he bounces outside and finishes with a nice juke inside to pick up the first down.

I've been really impressed with his ability to keep pressing inside while the blocks develop in front of him and hitting resulting lanes.

Below he sits inside with a couple stutter steps, then he's able to slip between the outside rush and the logjam inside.

CEH has shown a near mastery of reading his zone blocking schemes in front of him.

In the clip below he again presses inside then bends it outside. As soon as he sees an opening upfield he hits hard and shows good power to finish the run.

He has elite elusiveness and awesome lateral quickness. He employs an elite jump cut and an absolutely FILTHY spin move.

Below illustrates an example of the awareness and lateral movement CEH uses to get free. He's got a good understand of how to move to limit contact and stay alive. Most importantly, he has the burst to recover from those quick stops and change in directions.

As I mentioned earlier, CEH has an absolutely dirty spin move. He has so many plays like the one below.

He's SO good at anticipating defenders coming at him and making would-be tacklers look silly.

He should've been swallowed up by the defender below, but he stays patient and lets the defender up into his space before spinning to slip over the top and get an easy walk into the end zone.

I think this clip is one of CEH's most impressive as a receiver.

He lines up in the slot, has to really extend to make the play, then does a good job of looking upfield and then fighting his way to a first.

All of this on a crucial 3rd down in the 4th vs Bama.

Another really fun one... As soon as he catches it he has to react to a defender right in his face. He uses his silky smooth spin move to shake free then has another nice little cut to extend past the first down.

By far the biggest flaw in CEH's game is his pass pro. He seems to be willing to go out and make an effort, but he whiffs quite a bit.

When he does connect with a pass rusher it's not always pretty, but he doesn't shy away from it which is a plus.

I think CEH is more than just a receiving back and I believe he could excel in a zone running scheme.

I can't wait to see where he winds up in the draft, but he's someone who is going to be fun to watch regardless of landing spot.

After this session, I'd probably adjust my personal rankings to have Akers and CEH in a tier of their own behind the top tier of Taylor, Dobbins, Swift.