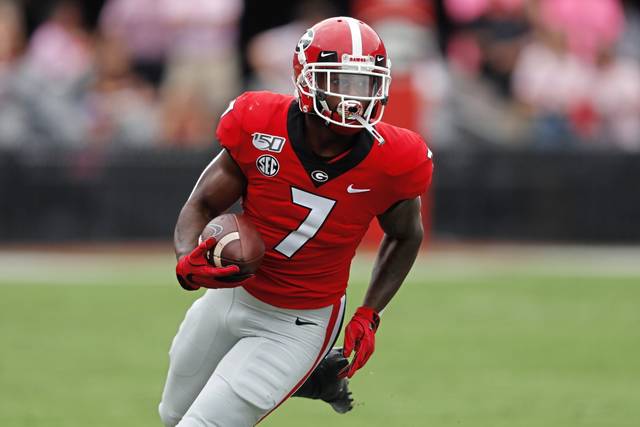 He's a great athlete and savvy runner with one of the strongest all around games in the class.

D'Andre is a great athlete due to his extreme twitchiness and ability to accelerate. Not a burner.

Strong, but not a bruiser. Runs really well through weak contact and arm tackles.

Below he shows off that athleticism, which comes out most in the open field.

He doesn't have elite top end speed or a second gear he can hit, but he's not slow. He can get to his top speed fast, which can lead to home run plays.

Below he shrugs off an arm tackle and takes off... weaving through the D to find the outside lane and the end zone.

There's probably not another back in this class I'd rather have to take advantage of green grass.

Here he bursts through the hole, then uses a nice jab step to cut inside. If he can keep his balance through the final dive it's a near perfect run.

Swift's strength, body control, and acceleration is a deadly combination, and on full display below.

Nice job evading a couple of dive tackles and keep moving north with some pace.

Swift isn't super fancy with his moves, he keeps things clean and effective.

He leaves the Alabama defender completely stood up and looking foolish with the simplest cutback inside.

It's not fair to Swift that I'm coming off of a recent CEH film study, but this is a really nice spin move nonetheless.

Great anticipation and really quick feet to break out of the spin and to the first down, followed up with a strong finish.

Below is a clean look at his signature dead leg which he uses really often and effectively.

It's a tough move to defend when you're attacking him at an angle, and he has a great understanding of how to use it to make defenders miss.

D'Andre isn't going to mow you over, but he has a strong base and upper body.

When he's running at full strength you need to make sure you come with more than an arm tackle or a dive at his legs as Kentucky learns below.

Here we have some more diving defenders, and we see a couple of nice stiff arms to keep separation. He has no problem turning it up again and getting a nice chunk of yards on the play after some early contact.

An underrated part of Swift's game is his ability to finish runs. He's one of those guys who is going to fight to win the extra inch at the end of every play.

Inside the five, he's met by the D and stalled, but he adjusts himself to find an extra burst.

Swift fights to get upfield like crazy. Here's a prime example of his toughness and fight to the finish.

It's not a huge play, but he never stops fighting for yards and turns what could've been 1-2 yards into 5-6.

D'Andre is one of the best receiving backs in this class. He has a lot of experience at this point running routes and being a part of the pass game and has developed a set of reliable hands.

Here he's tightly shadowed by a defender but gets open and hauls it in.

Here he's left open in the flats and does a good job catching in stride and eluding the defender to score on third down.

Here's a good example of his pass catching instincts and spacial awareness.

The catch is a little awkward and you'd like to see more of a hands catch, but he knows exactly where he is on the field and stays upright and in-bounds to get a few extra yards.

One of the better pass protectors in his class. Shows good technique and willingness to step into contact is great to see.

Can't ask for much more below in terms of reading the blitz and picking it up.

D'Andre will show flashes of brilliant vision. When he's seeing his blocking and the field well he's hard to stop.

Here is an outside zone concept and does a good job reading the play and bending inside.

However, there's plenty of occasions where he'll carry the ball into a cloud of dust because that's where the play is designed to go.

Here he has a clear path to his left underneath the left guard if he can bounce it.

Swift's creativity in open space and in one on one spots can leave something to be desired. He uses his set of moves really well, but sometimes it's just not enough in certain situations.

In the clip below you'd love to see a little more wiggle to free up.

Overall, I think Swift has near everything you look for in a stud NFL back. Lack of top end speed will prevent him from being an "elite" prospect relative to other classes, but he can be a really good three down back in the NFL.