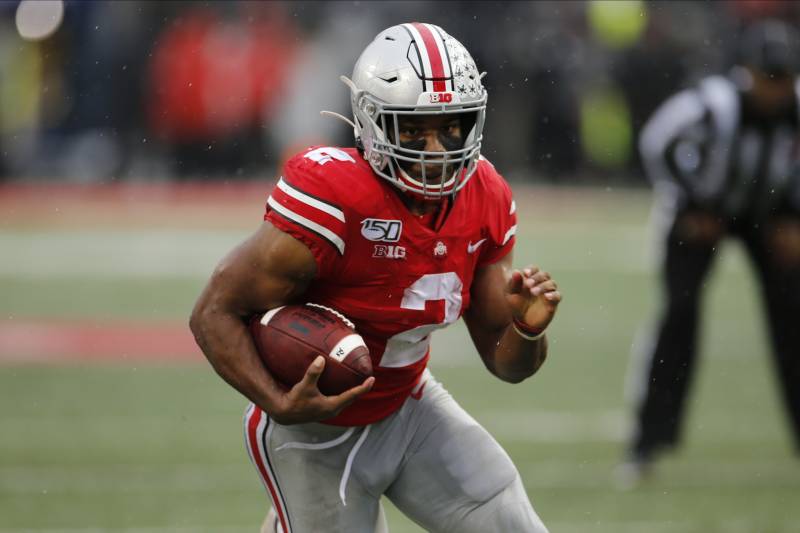 Position:
School:
Height:
Weight:
RB
Ohio State
5'10"
216 lbs
Dynasty Mark
A near consensus tier one back in this class, and for good reason.

He has a special blend of strength, burst, and elusiveness. By the measurables Dobbins may be the best athlete in the entire class.

Dobbins doesn't have elite speed, but I think he has great burst. He's REALLY good at getting to the second level.

Below he hits the hole hard, and once he has green grass he uses a nice cutback to trip up the defender and and then blows by him to cruise in for a TD

Here's another nice initial burst to get into open field untouched and keeps running towards green grass.

Again, Dobbins doesn't have elite second level speed, and it also looks like he's little gassed by the end of the run as he's caught from behind.

In the clip below he's able to keep stretching until he gets the corner and picks up more than enough for a 1st down.

Dobbins displays his strength while running in a LOT of different ways.

Here he uses a really nasty stiff arm to plant the defender in the dirt, then finishes the run strong to get 4-5 extra yards.

He's unfazed by contact from his own team early, then once a defender catches him he keeps churning his feet to extend the play quite a bit.

The run below displays a lot of the toughness Dobbins regularly displays.

Shows nice patience after getting jammed up early, then really good balance and strength while shedding multiple defenders as he fights for yards.

Below is a beautiful display of how good he is at shedding weak tackling attempts and running through contact.

He gets through 4-5 diving defenders and arm tackles from all different angles before finally being tripped up at the goal line.

A nice jump cut below allows him to get some space and find a path to the 1st.

Here his blockers give him a huge hole to get to the second level before Dobbins uses a really simple shake and cut to add 10+ yards to the run.

Really nice job pressing inside and a nice cut to the backside. He sees the safety coming down hard and over-committing, and again he uses a simple cut to get the first.

I love this play below because it's just a perfectly executed inside zone run.

The blocking is great, but it's Dobbins' ability to press to draw the D in, then his shiftiness to keep #1 on Wisconsin from crashing down because he's off balanced.

Dobbins isn't perfect in pass pro, but he's not bad either. He has solid technique and good effort. Does try for blow up shots.

Below he does a great job coming across the formation to pick up the outside blitz. Despite that the play still results in a sack.

He's does do really well picking up inside blitzes in pass pro.

Hand placement here is really nice and has great power to stand his guy right up. Perfectly executed.

Dobbins isn't a natural receiver, but he does alright.

He gets a little help from the ref in the clip below, but runs a nice angle route to get open and into the endzone.

Below would've been a tough catch, but it's a catch that an NFL back should make.

He gets his hands on it really well, but uses the ball to brace his fall instead of bringing it in and cradling it.

There were a few clear concentration drops that showed up on film.

Below is in OT against Maryland in 2018. If he's able to bring it in he's clearly got the first down, and if he can catch in stride he'd have a chance to get paydirt.

Dobbins only fumbled once in each of his first two seasons of action, but he had three in 2019.

Below he turns the ball over inside the 10 in a game where his team is down 7 in a game they probably shouldn't be losing. Really bad situation to turn it over.

Fumbling in college is not a death sentence, but it's something to keep an eye on as a pro.

Below it doesn't take much for the ball to pop loose, and seems to be a case of fighting for extra yards handicapping his ability to secure the ball.

I think this kid has a bright future as a featured back in the NFL because of his size, strength, shiftiness, and burst.

He won't be the top back in the class for me, but he's cemented himself in my tier one at RB.