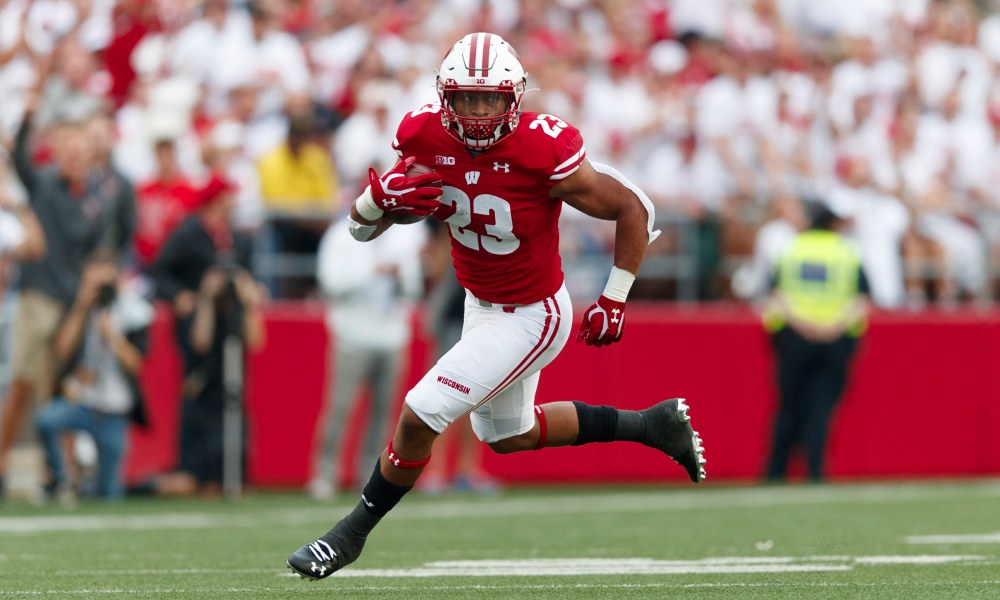 There's no doubt that he's got every tool to be a three down back in the NFL and he's my RB1 in this class.

JT's footwork and balance through almost any contact are other worldly and set him apart from other backs in the class.

Here's a great example as he stays balanced and sheds a few weak tackles then cuts into a defender and churns his feet for another 7.

JT uses his hands really well as a tool to fight contact.

Here's a nice cut of him shrugging off 3 defenders diving at his feet. He uses a nice stiff arm on the second one, but they way he is able to keep his speed and high step through contact is special.

A simple off-tackle look below that shows off his balance.

He bounces it a little bit and runs through a few diving defenders without slowing. Once he's wrapped up he manages to keep his legs moving and falls forward for extra yards.

This is a great look at how effortlessly he's able to maintain his footing through a lot of contact.

The juke, the broken tackle, and then just running through and over defenders like they aren't even there.

Even when he's seemingly off balance, he's hard to tackle.

Nice cut back inside here, and breaks through two defenders tackles (including one WAY off balance) before finally getting his foot caught, but he still finishes the run with a nice pop.

JT is a TOUGH runner, and one of my favorite qualities of his is how well he keeps his legs churning no matter what.

I love this clip up the middle where he's squeezing through the hole, but keeps pumping his knees and ends up carrying a pile for a great gain.

Here's another example I love again because of how small JT gets and how patient he stays behind his blocks, then squeezes through and drags the defender past the first down.

In the clip below, JT reads his block well and cuts inside and it's one of those where you take what you can get.

But what it showcases is JT's tendency to fall forward when tackled. He keeps churning to win the momentum battle and pick up a few extra yards.

Here's another favorite of mine because it shows some of his raw power.

The play starts off with a nice jump cut to get through the hole, but JT loses his balance. Even so, he's able to deliver a big hit on the defender and finish the play falling forward.

Another trait that is going to serve JT very well at the next level is his ability to see defenses and process everything in front of him.

Below is a great job staying inside to ensure the defense over-commits before a beautiful cut to get the outside lane.

Part of having great vision is processing the D and knowing when to hit which moves to find lanes.

On this play, JT gets to the second level and sees the defender coming hard over the top so he spins underneath him to give himself a lane for a huge gain.

In this clip JT loses his balance caused by some backfield penetration. He doesn't panic, and he's able to clearly see the path towards green and he slides through the hole and lets his speed take over.

JT has some of the best straight line speed in the class.

This is a really bad look from Michigan and well blocked by Wisconsin, but doesn't take anything away from JT's straight line speed to take this one to the house.

He doesn't always looks super explosive from a stop, but if you give him the space to build up, he's going to hit a second level speed that not many can keep up with.

Below is some simple maneuvering before finding enough green grass to hit the jets, the D has no shot.

JT doesn't have ELITE jukes or lateral quickness, but he can do alright to evade defenders.

Here's a perfect little side step and dismisses a diving defender. Didn't take a huge lateral cut to shake free and extend the run.

Here's a nice cutback vs Purdue. JT sees the defender lurching a little bit and gives a really simple move which caught the defender off guard and adds about ten yards to the play.

Slight knock on JT is his receiving consistency, but I think he's looked solid enough. He has a few drops here and there, but he's also shown soft hands.

Here's a nice little out route just on top of the first down marker. Great positional awareness and hands catch.

Here he's lined up out wide at the bottom of the screen and sits in a soft spot in the D.

Another nice hands catch before he gets upfield immediately and fights his way in for a score.

Pass protection is not an issue for JT. He's really physical and always gets to the right place to pick up the blitz.

Great job going out and initiating contact and taking the defender out of the play.

Good job here by JT to come across the formation and get enough contact to upend the defender.

Despite it not being super solid contact. He nails the barrel roll to get sideways and kicks his legs out to make sure he trips up the defender.

He's had 968 touches over 3 seasons. That's a lot of work for a college back, but not a death sentence for his NFL future.

The other is the fact that he's had 15 fumbles over 3 seasons, which is really bad... but fumbling is correctable.

After watching all of the top backs, I feel safe saying JT is my RB1 (pending landing spots).

His size, speed, and power is everything you look for in a pro back. If he can get over his fumbling problem, he's going to be a weapon in the NFL.